If you’re employed by someone else you filled out a W2 or W4. The employer then deducts payroll taxes such as social security tax, medicare tax, federal income tax, state income tax etc. However, if you have a side business or are completely self-employed the government still wants their share of the money.

There are four due dates throughout the year where you can pay your estimated income taxes. The due dates are:

Prepare to pay the taxes as you’re earning money. Depending on the amount of side income, set aside 25-30% of your earnings to pay estimated income taxes. If your business or household is strapped for cash and you’d rather keep your money throughout the year, then you risk paying a penalty. 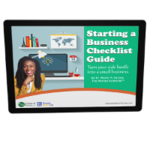 Learn 10 key steps you need to start a business and turn a side hustle into a business.

Success! Now check your email to confirm your subscription.

The penalty can be 6-8% of the amount you owe. Yep, the government will punish you if you don’t give them your money fast enough. However, if money is tight or you ‘re in the middle of a venture and you really need to hold on to the cash then you have options to avoid the penalty. If you made less than $150,000:

However if you made more than $150,000, you must pay at least 110% of your previous year’s tax bill in estimated payments. Caution: You may still be hit with a penalty for underpaying the taxes throughout the year. It’s better to pay the quarterly installments for your estimated income taxes.

If you have many other deductions like startup costs, home office etc., you may want to consult an accountant or a tax preparer who has experience handling the taxes for individuals in your situation. It can get tricky and having a trusted expert to help you will be very beneficial. They also know of deductions that you don’t or didn’t know applied to you.

Dr. James, The Money Scientist, has expertise with designing income management, debt management, and wealth strategies to help you live your best life. She is the founder of Pocket of Money, LLC and the creator of The Wealth Protocol™. Dr. James has also been a guest financial expert on ESSENCE, WEAA, Madame Noire and more.
View all posts by Dr. Maria James →